Dr. Susan Fowell grew up in Phoenix, Arizona where she attended grade school and high school. She was a Junior Miss winner at the city and state level (1977) and her participation in the national level earned her substantial scholarship funding.

She attended Northwestern University in Evanston, Illinois on an academic scholarship where she majored in Biology and English Literature and graduated Summa Cum Laude (1977-1981). She remained at Northwestern and attended medical school at the Chicago campus where she was voted into AOA (Alpha Omega Alpha), a medical school honor society, and graduated at the top of her medical school class (1981-1985). She remained at Northwestern for her internship year in clinical medicine and then completed her ophthalmology residency under the direction of Dr. Lee Jampol. She then completed a fellowship in the medical and surgical retina at Northwestern, again under the direction of Dr. Lee Jampol, along with Dr. Robert Schroeder and Dr. Frank LaFranco. She opened Northern Illinois Retina in January of 1991.

Dr. Susan Fowell is an assistant clinical professor for the University College of Medicine where she has mentored several students who have interests in Ophthalmology.  She is a Life Fellow of the American Academy of Ophthalmology (AAO), a Fellow of the American Society of Retina Specialists (ASRS), a member of Women in Retina (WinR), Chicago Ophthalmology Society (COS), and Illinois Association to Prevent Blindness. Dr. Fowell attends two major scientific meetings each year, seeking to bring the latest treatment methodologies and findings back to her patients.

Dr. Fowell lives locally in Rockford where she raised her three children. When she is not busy seeing patients, she is an avid equestrian enthusiast. She also continues to study the piano and is an avid reader. 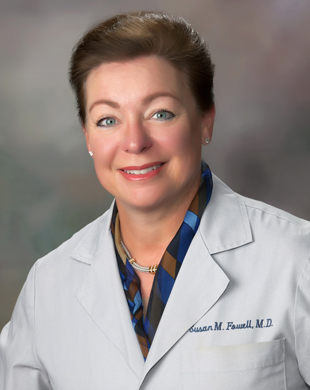 Call us today to schedule your appointment: